Before you can hunt the bobwhite quail, you need to understand them.

So, why is quail hunting such a popular pastime? Why do these game birds pose such a challenge that hunters just can’t refuse?

With the largest range of any other game bird in the country, the bobwhite quail has earned itself the number one spot in birds to hunt in the eastern and southern United States—and we believe it with all of our patrons taking advantage of our popular quail hunts!

One of the more common species of quail, the bobwhite has distinct features that set them apart. 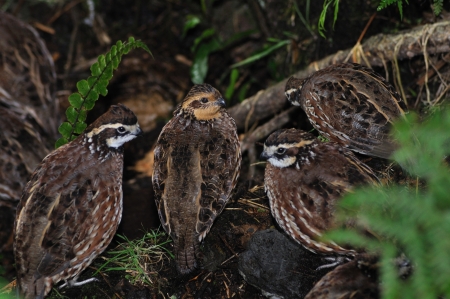 There is a large patch over the throat accompanied by a distinct streak above the brow, white for males and buff yellow or brown for females.

These game birds like to lay low to the ground for all of their feeding, nesting, and resting, but we’ll get to that a bit later!

As a hunter, you’ll witness them running from one patch of thicket to another, never taking flight to cross the small area.

However, when the dogs are sent in to flush the roosts, these game birds start beating their small, round wings and take off altogether, providing you with the ultimate opportunity to bag one of the birds from the covey.

Quail tend to flock together in groups called coveys. Anywhere between eight and 25 quail will belong to one covey at a time.

As the breeding season looms closer, quail tend to form bonds and pair up, separating from the covey.

Speaking of the breeding, quail tend to begin pairing up in the late spring and early summer. During the breeding season, you can hear the unmated males begin to whistle their signature bobwhite call letting the females know they’re ready to nest.

The male will whistle to gain attention, turn his head to show off his beautiful pattern, and fluff up his feathers to impress his intended female.

These birds tend to have a very short lifespan since they are a well-known prey for many, including hunters. Many don’t make it past a year; that’s where functioning coverage comes in! 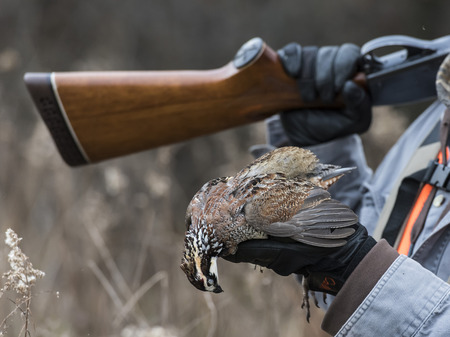 In Texas, the bobwhites find refuge in tall grasses, mesquite brush and any other vegetation that will hide their small, round bodies.

Quail need functioning cover just as much as they need food in order to survive.

They use the dense thicket to fly under the radar of predators and go about their daily activities like feeding, resting, and nesting. This cover also protects them from the elements.

Schmidt Double T Ranch is designed to develop and manage prime coverage with more than sufficient food plots and water stations for attracting this game and maintaining their survival.

Once you have a better understanding of these birds, you will be better equipped to bag them.

With an abundance of bobwhite quail across the ranch, Schmidt Double T Ranches is the perfect location for your next birding adventure.